COVID-19: Issues faced by Developers under the Housing Development (Control and Licensing) Act 1966 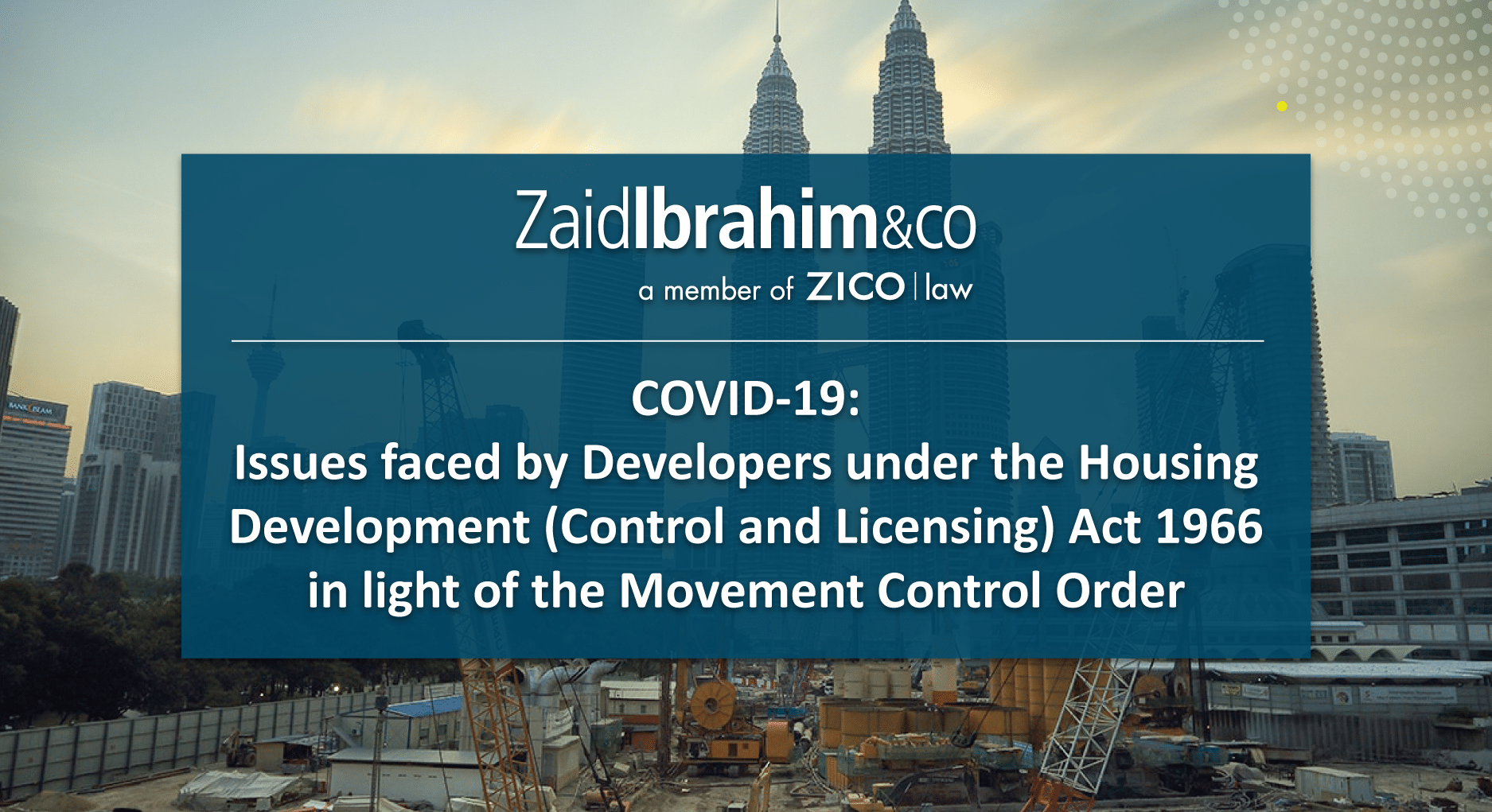 All development projects in Malaysia have been halted since 18 March 2020 in view of the Movement Control Order (“MCO”), which has now been extended to 28 April 2020. As the housing development industry is not considered as an essential service industry, developers are unable to carry out any of the construction works until the MCO is lifted. As such, developers may be facing issues in relation to agreements they have entered into with purchasers.

Based on the above, the following issues will be discussed in this article:

Time is of the essence

Clause 8 of Schedule H and clause 9 of Schedule G of the HDA 1966 clearly provide that the time of the contract shall be of the essence in relation to all provisions of the agreement.² In this respect, the time for the developer to complete its obligations under the agreement by a particular date is fundamental.³

Since time is of the essence, there are a few potential issues that may be faced by the developer.

During the MCO, a common query raised with regard of the delivery of vacant possession of the property developed under Schedule H is as follows:

Clause 26 of Schedule H and clause 24 of Schedule G provide that vacant possession of the property must be delivered to the purchaser:

(a) 36 calendar months from the date of the Agreement – Schedule H; and

(b) 24 months from the date of the Agreement – Schedule G.

As the time for the developer to perform its obligations is fundamental under the agreement, therefore the developer is required to deliver the vacant possession within the time period stipulated under both Schedule H and G of the HDA 1966. Otherwise, they will be penalised for the delay with LAD.⁴

Based on the agreement, the developer is unable to issue the notice via e-mail because any notice has to be served by way of registered post or hand.⁵ Furthermore, Schedules H and G do not provide for any Force Majeure clause or exemption clause in the agreement to protect the interest of the developer in the event the developer faces this scenario i.e. the MCO or any other supervening event that prevents the parties’ respective obligations in the agreement from being completed.

Besides, there is also nothing in the agreement which states that the time will be frozen due to any supervening event.  As it stands, due to the MCO, all development site operations would have been suspended and all developers’ offices are unable to operate at this juncture.

In such a situation, it is better for the developer as well as the Ministry of Housing and Local Government (“the Ministry”) to consider that the time under the agreement is now frozen until the MCO is lifted. A further corresponding period of extension should be granted to all the developers under Schedule H and G if the MCO period is not extended any further.  Practically, this may be considered as the best possible solution.

Nonetheless, there has yet to be any such direction or guideline issued by the Ministry.

As such, what will happen in the event that time is considered to continue to run even during the MCO period? Will the developer be penalised with LAD for its failure to deliver the vacant possession of the parcel/property to the purchaser due to the MCO?

The first that comes to mind will be section 57 of the Contracts Act 1950 which denotes the application of the doctrine of frustration of the contract. However, as a developer, would a developer want the agreement to be frustrated in the first place? It is safe to say that most developers will not want the agreement to be frustrated (if the said development has been completed or it has commenced its work on the said development) because once it is frustrated, the monies that had been paid to the developer would have to be returned to the purchaser or bank. Commercially, it is not advisable to do so.

Can we use the doctrine of severability⁶ instead? The answer is also no. The doctrine refers to a provision in a contract stipulating that in the event parts of the contract are found to be illegal or otherwise unenforceable, then the remainder of the contract should still apply. Schedules H and G do not provide for such a clause in the agreement. Besides, the most important obligation in the agreement that is affected is the delivery of vacant possession of the property, and such a clause cannot be deemed to be unenforceable.

The sale and purchase agreement is also a contract provided by statute in which section 56(3) of the Contracts Act 1950 has no application⁷ and parties to a contract in Form H and G cannot contract out of the scheduled form.

Based on the above, it appears that there is nothing that had been offered to protect the interest of the developer during the MCO period in the event that time is considered to be running.

This is the first time Malaysia has announced a Movement Control Order after the Emergency in 1948, and during the period from 1969 to 1971. As far as can be ascertained, Malaysian law does not possess any exemption, disclaimer or other legal mechanisms which are able to assist the developer during this COVID-19 pandemic.

There are other questions that arise at this instance such as can the developer and the purchaser agree to abridge the time at no extra cost to either party? Would this be deemed as contracting out of a statutory contract? Can a party contract out of a statutory contract? Can the minister grant an Extension of Time to the developer under both Schedules G and H in view of the implementation of the MCO?

The best solution now evidently, would be for the developer to consider being proactive in seeking the direction or any guideline from the Ministry pursuant to section 12 of the HDA 1966 in as clearly Schedule G and H do not cover these situations.

If an extension of time is required to bridge the gap caused by the MCO, then the Federal Court’s decision in Ang Ming Lee’s case⁸ will have some bearing here – developers can write to Real Estate and Housing Developers’ Association (REHDA) to co-ordinate a meeting with the Ministry to discuss the options available to developers or write to the Ministry to arrange for a meeting.

Whether the time period under the Defect Liability Period is running during the MCO?

As it stands, the developer will only able to commence the defect liability work as soon as the MCO is lifted. Arguably, the developer should also be able to negotiate with the purchaser, who had issued their defect liability notice to the developer via e-mail, with regard to the time for it to carry out its obligation after the MCO is lifted. Both the purchaser and developer can enter into a settlement agreement once the MCO has been lifted as the courts have recognised that settlement agreements may be entered into even where the sale and purchase transaction falls under the HDA.¹¹ However, whether such settlement agreements are recognised after the case of Ang Ming Lee, is still subject to discussion.

In the event that the time is considered as running, then the fastest solution will be similar as the above which is to seek clarification from the Ministry in respect of the parties’ obligations under the Schedules.

As there is no direction or regulation currently issued or gazetted by the Ministry, the obligations of the parties still remains and the time frames under Schedules G and H respectively will be considered as continuing. In this respect, it will be unfair to all developers, in view of the current situation, if they are faced with exemplary amounts of LAD. The Ministry should act fast to resolve the current issue, as the lifting of the MCO will be akin to lifting the lid off Pandora’s Box.

If you have any questions or require any additional information, please contact Neo Chi Chyn or the Zaid Ibrahim & Co. partner you usually deal with.

Mandatory Use of E-Court for Certain Districts in Indonesia