The Companies Act 2016 (“CA 2016”) requires every private company to appoint an auditor for each financial year of the company for purposes of auditing its financial statements.

The Registrar of Companies (“Registrar”) may however exempt certain qualifying private companies from having to appoint an auditor according to the criteria and conditions set out in the Practice Directive. 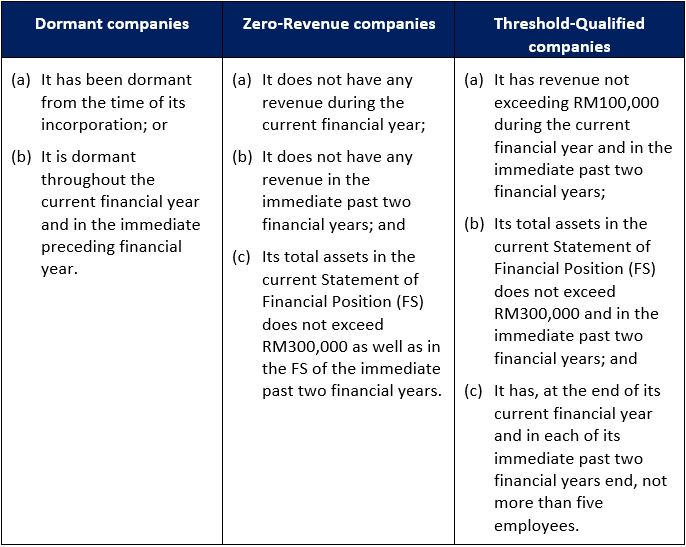 2. When the audit exemption takes effect

The audit exemption will apply for a qualifying private company’s financial statements with annual periods commencing on or after the dates stated in the Practice Directive as follows:

The exemption under the Practice Directive will not apply to a company that has lodged a certificate relating to its status as an exempt private company with the Registrar pursuant to the CA 2016.

3. Members of the company or the Registrar can still require an audit

4. Companies electing for audit exemption are still required to prepare and file accounts with CCM

A private company that elects to be exempted from audit must still prepare and circulate its unaudited financial statements within the time period stipulated in the CA 2016 and which complies with applicable approved accounting standards.   The unaudited financial statements must be lodged with CCM together with the directors’ report, statement by directors and statutory declaration prescribed by the CA 2016 as well as an audit exemption certificate within 30 days after circulation.

In its Frequently Asked Questions updated on 9 August 2017, CCM also provided further clarification on the implications of the Practice Directive.

Among other things, CCM has clarified that it is not necessary for an eligible private company that satisfies the criteria under the Practice Directive to apply for audit exemption.  It can simply elect to do so.  The Practice Directive does not preclude such company from engaging an auditor and the company can still engage one to conduct an audit if there is a need for it.

If you have any questions or require any additional information, please contact Shermaine Ng or the ZICO Law partner you usually deal with.

Administrative Sanctions for Failure to Comply with Competition Regulations