In this Article, we look at the notable changes of the New Law compared to the Old Law.

“Competition restraining impact” is defined as “impact which excludes, reduces, distorts or hinders competition in the market”. This is a broad definition and may be open to interpretation.

In short, under the New Law, Vietnamese authority may claim authority over offshore activities or transactions in cases where there is an impact on Vietnamese market. This means that the New Law would apply to any foreign companies which are related to competition-restricting agreements, economic concentration, or unfair competition, regardless of whether they have any subsidiaries in Vietnam.

Additionally, the new Competition Law also applies to public service units, for example, hospitals, schools etc., which were not governed under the Old Law.

Below is a summary table on the new approach of the New Law compared to the Old Law: 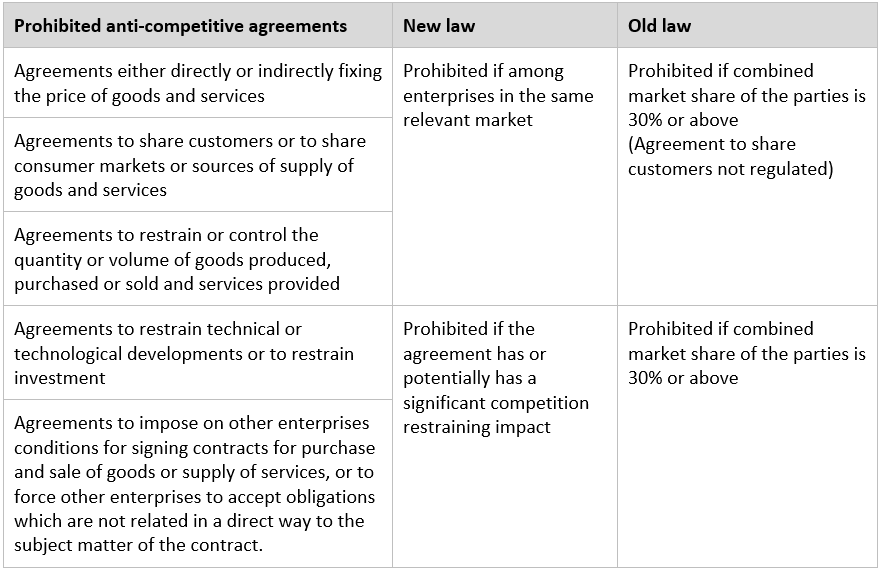 The NCC will assess whether an agreement has or potentially has a significant competition restraining impact in the market based on several factors, including but not limited to the following:

Another key change with respect to anti-competitive agreements regulation is the introduction of a leniency program. Accordingly, a company that has engaged in an anti-competitive agreement may be entitled to leniency (i.e. exemption or reduction of penalties) if the company voluntarily reports their participation to the competent authority prior to the authority’s decision to investigate. This is made available to only the first three successful applicants.

The Government likely will provide further guidance on the above factors.

The Government likely will provide further guidance on the above criteria.

The New Law aims to incorporate international antitrust practice as well as combine economic and legal thinking for regulating competition and is expected to provide an equal and competitive environment for businesses.

If you have any questions or require any additional information, you may contact Phuong Nguyen, Duc Tran, or the ZICO Law partner you usually deal with.