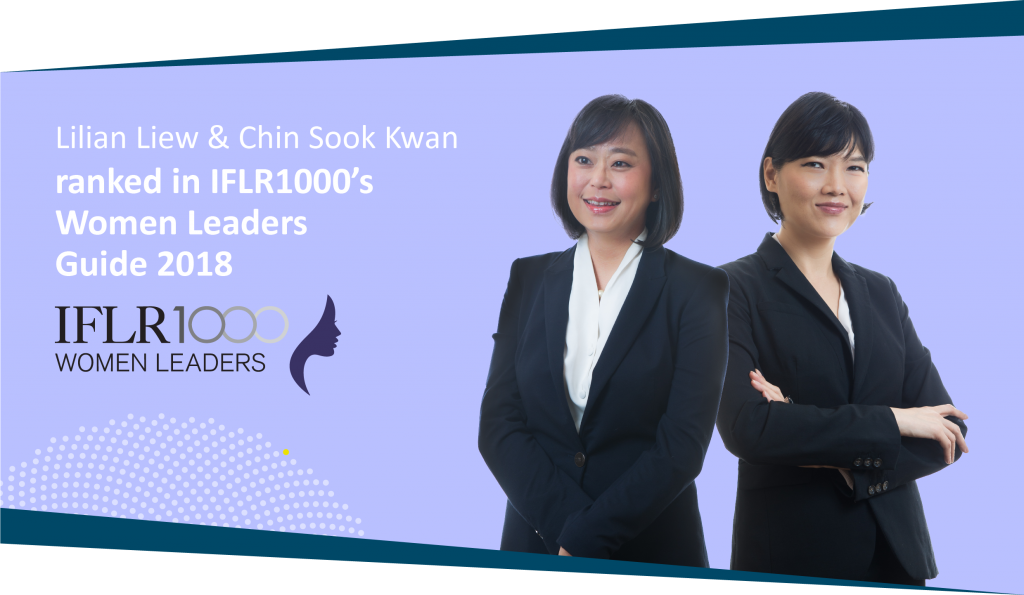 Zaid Ibrahim & Co Partners Lilian Liew and Chin Sook Kwan were two of only four women lawyers from Malaysia ranked in IFLR1000’s Women Leaders Guide 2018. This publication selects 300 female lawyers reputed to be the best transactional experts in their market and practice areas.

Lilian is the head of Zaid Ibrahim & Co’s debt capital markets and structured finance practice. Under her leadership, the practice has consistently been ranked top tier in international publications such as Chambers, Legal 500, and International Financial Law Review (IFLR). Lilian has led many award winning capital market deals, the most recent being the 2018 award for Project & Infrastructure Finance Deal of the Year by Islamic Finance News for her role in the world’s largest green SRI sukuk, Quantum Solar Park’s RM1 billion Green SRI Sukuk.

Sook Kwan has been named as a leading lawyer in banking and finance and debt capital markets in many notable publications including Chambers, Legal 500, Who’s Who Legal and the International Financial Law Review (IFLR). Sook Kwan was also the recipient of the 2018 award for IPO Deal of the Year by Islamic Finance news for her role in the issuance of retail Sukuk under the “Sustainable and Responsible Investment Sukuk” (SRI) framework by Ihsan Sukuk Berhad, with recourse to Khazanah Nasional Berhad.

This recognition is part of a slew of awards and accolades ZICO Law has earned this year. These include being named as an Innovative Law Firm in the Financial Times Innovative Lawyers 2018, winning two awards at the ALB Malaysia Awards 2018, as well as being the only ASEAN-based law network featured in IFLR’s Firms to Watch 2018 which highlights global law firms that have distinguished themselves as market leaders within the legal industry.

To find out more about this publication: https://www.iflr1000.com/NewsAndAnalysis/Welcome-to-IFLR1000-Women-Leaders/Index/8381