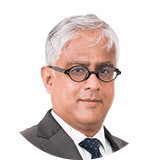 Alvin Julian is an experienced litigator who has been actively in practice for over 25 years and has appeared before all levels of court and alternative dispute resolution forum in Malaysia.

Alvin has been commended as a Leading Lawyer in Dispute Resolution by the Legal 500 Asia Pacific (2013-2015) and has been eminently ranked by various legal publications including Benchmark Legal Analysis which noted Alvin as “a very decent attorney with an arsenal of ideas.”

Alvin commenced legal practice in 1993. In 1997 he became a partner at Paul Chong & Kraal and led a team of lawyers that specialised in providing litigation services to various institutional clients. Prior to joining the firm Alvin also served as a partner at Shearn & Delamore & Co before taking the role as a consultant at Tunku Munawwir & Solomon.