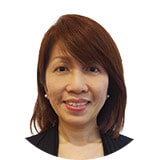 Karen has almost 20 years of experience in the corporate finance sector.

Notable deals which Karen was involved in during the last ten years include the following:-