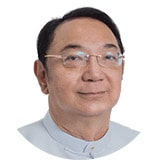 Dr Maung Maung Thein is a former Deputy Minister of Finance and has over 40 years’ experience working in the public and private sectors.

A lawyer by training, he was instrumental in the establishment and liberalisation of the Myanmar Insurance market and the historic commencement of the Yangon Stock Exchange in 2016. He is also well known for his work in international affairs, and his specializations include banking and non-banking financial sectors.

Dr Maung Maung Thein started his career as a part-time tutor in the Law Department of Yangon University. He later moved to various government agencies including the Housing Authority, the National Shipping Line and National Insurance Co.

He was formerly serving as Chairman of Securities and Exchange Commission of Myanmar (SECM), Chairman of the Insurance Business Regulatory Board, Deputy Chairman of Microfinance Regulatory Board and Member of the Myanmar Investment Commission amongst others. Currently, Dr Maung Maung Thein is also a consultant to the Union of Myanmar Federation of Chambers of Commerce and Industry (UMFCCI), a national level non-governmental organization representing and safeguarding the interests of the private business sector in Myanmar. He is also a member of the SME Development Central Committee which is chaired by the President and the State Counsellor. His academic achievements include publishing six books, including a notable textbook on Insurance Law in the English language that is being taught in the Universities) and written over 350 articles some of which have been published in overseas publications. He is also a visiting guest lecturer at various universities in Myanmar and is regularly invited to speak on national television programs on finance and business.